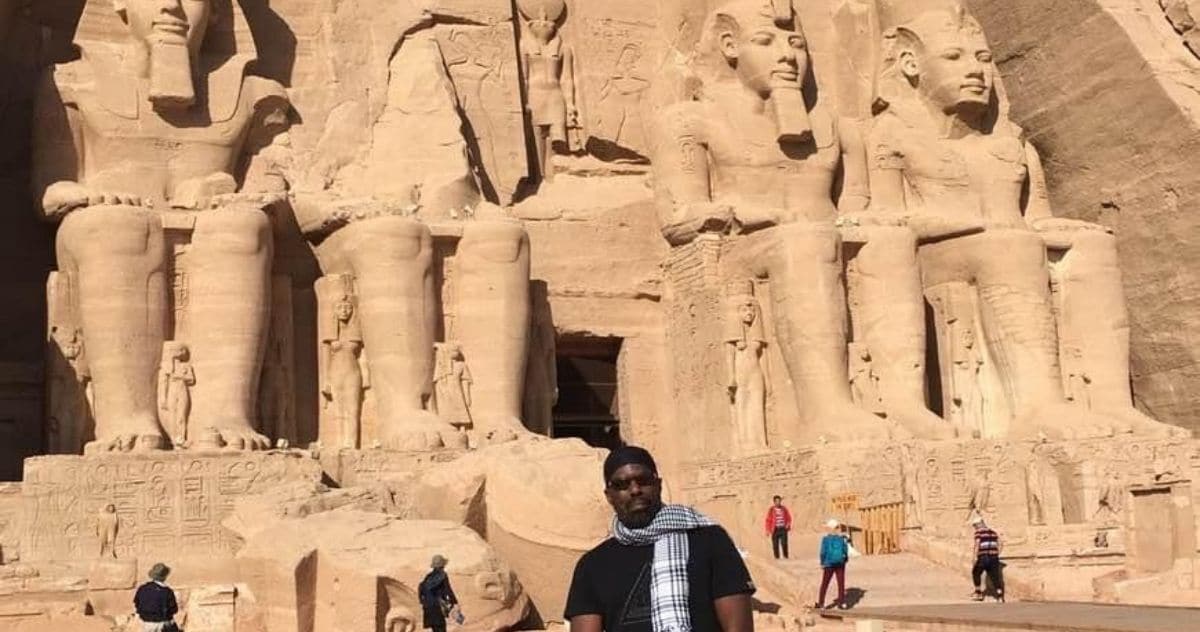 This is the Temple of Rameses Meri Amun,  which means Rameses beloved of Amun.  It was built over 3 thousand years ago by Rameses II of the 19th dynasty near the southern border of Kemet with the country now called Sudan which was in the region once known as Kush.

This temple which remains one of the seven wonders of the world is characterized by four colossal statues of Rameses II each one 66 feet tall.  Rameses is seated in the Pharaonic sitting position with a meditative expression on his face.  In fact, the entire sitting pose demonstrates a deeply meditative and contemplative perspective that is consistent with the Kemetic meditative practice called RSWT QWED which means to be in an extremely deep relaxed state with total awareness and clarity.

The Pharaoh in essence is an expression of the divine force that underpins all of creation.  He represents not just a political function but also a cultural spirituality that valued connection with the unseen world of the subconscious from which extreme creativity and genius could be accessed in order to achieve phenomenal feats such as the construction of edifices like the Temple of Rameses Meri Amun.  Our ancestors engaged in meditation practices that allowed them to access aspects of the mind associated with envisioning the attainment of goals and the solving of problems that appear beyond human capability.

This is why so many mistakenly attribute the accomplishments of our ancestors with contact with alien beings or fanciful theories of access to advanced technology rather than simple problem solving using advanced thought processes and thinking outside the box.

This temple is built using techniques that have not been figured out or duplicated to this day.  It is built from a solid sandstone mountain and extends over 200 feet into the rock with a complex system of rooms, chambers, huge carvings, and paintings on the interior.  At the furthest reaches of the temple’s interior is a room called the Holy of Holies which is the most sacred space of the entire structure.  In this room are four statues of Amun, Rameses II, Rahoracte, and Ptah.  This temple was built with the intention that on two days of the year, February 22 and September 22, the sun would come into the room and illuminate the first 3 statues and miss the fourth one of Ptah because he represented the underworld and was to remain in the darkness.  The “underworld” is a symbolic reference to the subconscious mind.

Only a mind that is operating on a level only accessible from a state of lucid dreaming would be able to solve the technological challenges required to build this temple.